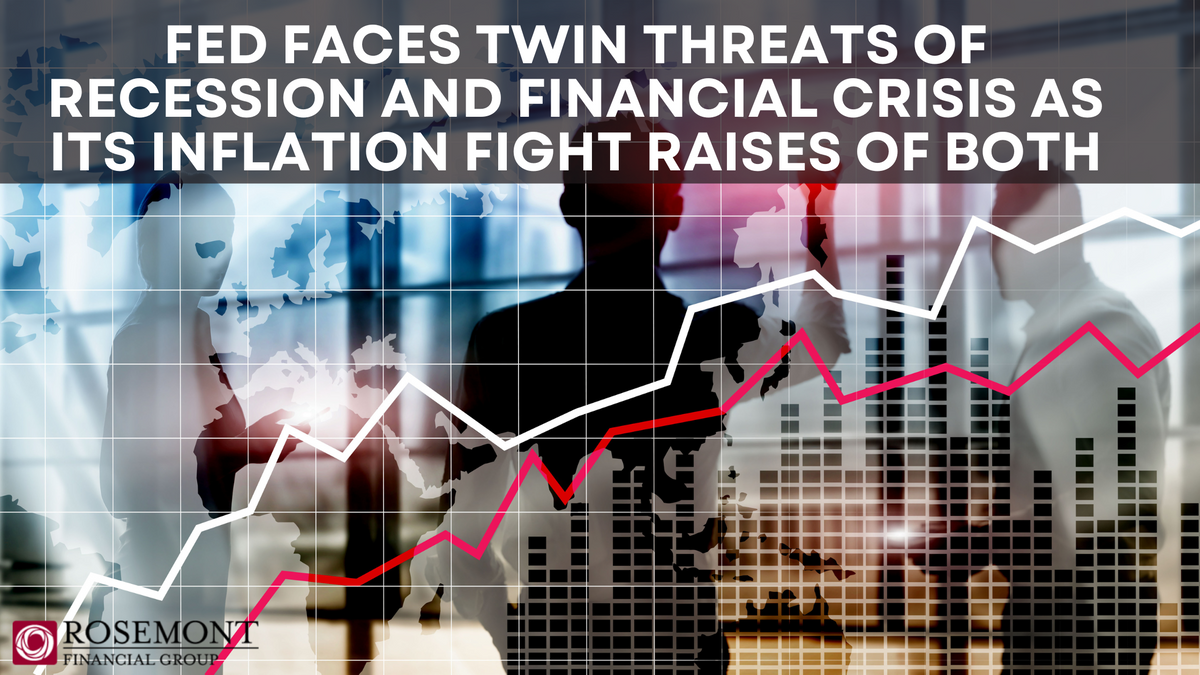 There is wide agreement among economists and market observers that the Federal Reserve’s aggressive interest rate hikes will cause economic growth to grind to a halt, leading to a recession. Less talked about is the risk of a financial crisis as the U.S. central bank simultaneously tries to shrink its massive balance sheet.

As expected, the Fed on Nov. 2, 2022, lifted borrowing costs by 0.75 percentage point – its fourth straight hike of that size, which brings its benchmark rate to as high as 4%.

At the same time as it’s been raising rates, the Fed has been quietly trimming down its balance sheet, which swelled after the COVID-19 pandemic began in 2020. It reached a high of US$9 trillion in April 2022 and has since declined by about $240 billion as the Fed reduces its holdings of Treasury securities and other debt that it bought to avoid an economic meltdown early in the pandemic.

As a finance expert, I have been studying financial decisions and markets for over a decade. I’m already seeing signs of distress that could snowball into a financial crisis, compounding the Fed’s woes as it struggles to contain soaring inflation.

As part of its mandate, the Federal Reserve maintains a balance sheet, which includes securities, such as bonds, as well as other instruments it uses to pump money into the economy and support financial institutions.

The balance sheet has grown substantially over the last two decades as the Fed began experimenting in 2008 with a policy known as quantitative easing – in essence, printing money – to buy debt to help support financial markets that were in turmoil. The Fed again expanded its balance sheet drastically in 2020 to provide support, or liquidity, to banks and other financial institutions so the financial system didn’t run short on cash. Liquidity refers to the efficiency with which a security can be converted into cash without affecting the price.

But in March 2022, the Fed switched gears. It stopped purchasing new securities and began reducing its holdings of debt in a policy known as quantitative tightening. The current balance is $8.7 trillion, two-thirds of which are Treasury securities issued by the U.S. government. 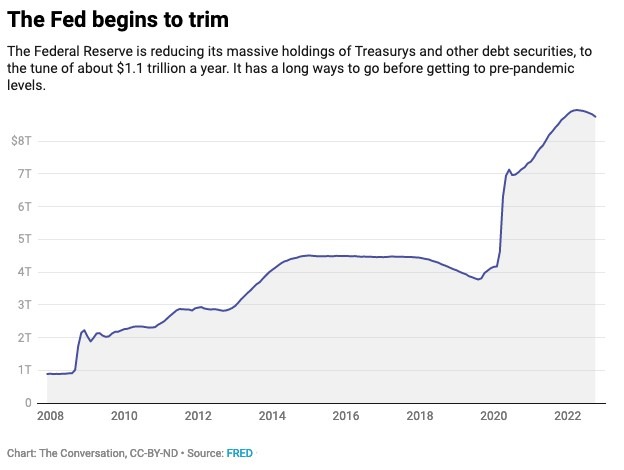 The result is that there is one less buyer in the $24 trillion treasury market, one of the largest and most important markets in the world. And that means less liquidity.

Markets work best when there’s plenty of liquidity. But when it dries up, that’s when financial crises happen, with investors having trouble selling securities or other assets. This can lead to a fire sale of financial assets and plunging prices.

Treasury markets have been unusually volatile this year – resulting in the biggest losses in decades – as prices drop and yields shoot up. This is partly due to the Fed rate hikes, but another factor is the sharp loss of liquidity as the central bank pares its balance sheet. A drop in liquidity increases risks for investors, who then demand higher returns for financial assets. This leads to lower prices.

The loss of liquidity not only adds additional uncertainty into markets but could also destabilize financial markets. For example, the most recent quantitative tightening cycle, in 2019, led to a crisis in overnight lending markets, which are used by banks and other financial institutions to lend each other money for very short periods.

Given the sheer size of the Treasury market, problems there are likely to leak into virtually every other market in the world. This could start with money market funds, which are held as low-risk investments for individuals. Since these investments are considered risk-free, any possible risk has substantial consequences – as happened in 2008 and 2020.

Other markets are also directly affected since the Fed holds more than just Treasuries. It also holds mortgages, which means its balance sheet reduction could hurt liquidity in that market too. Quantitative tightening also decreases bank reserves in the financial system, which is another manner in which financial stability could be threatened and increase the risk of a crisis.

The last time the Fed tried to reduce its balance sheet, it caused what was known as a “taper tantrum” as debt investors reacted by selling bonds, causing bond yields to rise sharply, and forced the central bank to reverse course. The long and short of it is that if the Fed continues to reduce its holdings, it could stack a financial crisis on top of a recession, which could lead to unforeseen problems for the U.S. economy – and economies around the globe.

Obviously, not everyone agrees, including the U.S. Treasury, which said that the lower liquidity is raising government borrowing costs.

The risks of a major crisis will only grow as the U.S. economy continues to slow as a result of the rate hikes. While the fight against inflation is hard enough, the Fed may soon have a two-front war on its hands.

The opinions voiced in this material are for general information only and are not intended to provide specific advice or recommendations for any individual security. To determine which investment(s) may be appropriate for you, consult your financial professional prior to investing.

Investing involves risks including possible loss of principal. No investment strategy or risk management technique can guarantee return or eliminate risk in all market environments.

Treasuries are a marketable, fixed-interest U.S. government debt security. Treasury bonds make interest payments semi-annually and the income that holders receive is only taxed at the federal level.

An investment in the Money Market Fund is not insured or guaranteed by the Federal Deposit Insurance Corporation or any other government agency.  Although the Fund seeks to preserve the value of your investment at $1.00 per share, it is possible to lose money by investing in the Fund.

Liquidity risk is the risk stemming from the lack of marketability of an investment that cannot be bought or sold quickly enough to prevent or minimize a loss.

All information is believed to be from reliable sources; however LPL Financial makes no representation as to its completeness or accuracy.

This article was prepared by RSW Publishing.

RSW Publishing has an agreement to republish this authors' content.